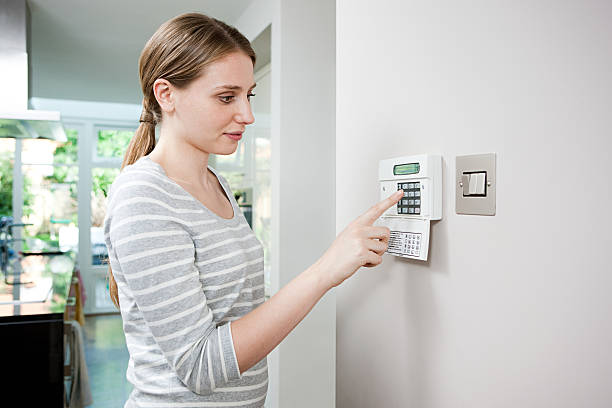 You spend time and money to create a nice home. How can you protect it from intruders without it costing a fortune? It’s easier than you think.

Chris Hsiung, a lieutenant with the Mountain View Police Department in California, says that the securityinvolves multiple deterrents to dissuade opportunists and thieves from making your home a target.

Contrary to what you see on TV, Hsiung says most homes are burglarized during the day when residents are out. “Burglars do not want to confront anybody. At the first sign of occupancy, they’re gone,” he says. “They just want to grab property and sell it. The criminals know that when someone is in the house, it changes the crime classification.”

Because of this, thieves frequently pose as solicitors, he says. If no one answers the door, that’s their cue to head around back and break in. Outsmart a thief with these home security tactics for less.

Using common sense is one of the best ways to prevent a home intrusion, Hsiung says. “You’d be surprised how many people leave doors and windows open when they leave.”

Even an open garage door invites a quick theft of whatever you store in there. If a thief sees a bike in an open garage, it’s an easy mobile crime to commit. “They come in by foot and take off on the bike,” Hsiung says.

Because some burglars case an area for a target, be discreet before leaving town on a trip, which could alert thieves you’ll be away. “If you’re heading to the airport, you don’t want to advertise it with your car trunk open, filled with suitcases,” Hsiung says. Instead, gather your suitcases indoors, and put them in the car all at once, closing the trunk as soon as you’ve loaded it.

To keep prowlers away when you’re out of town, make the home look like it’s still occupied, says Hsiung. Make sure to cancel newspapers, and have the post office hold your mail, so it doesn’t stack up in front of your home. Also, try plugging in timers to light your house while you’re away. Hsiung says programmable timers are available that can be set to come on randomly or at different times. If burglars have the patience to stake out a house and analyze patterns, this can throw them off.

Your neighbors can be your best home security — especially the nosy one next door. Cranford, N.J., homeowner Rachel Schwartz says one of her neighbors frequently looks out the window to see what’s going on in the neighborhood. Last year, the woman saw two men outside a house looking suspicious. She called the police, and the men were caught cutting the window screen trying to break in. “If she’s home, nothing gets by her,” Schwartz says.

There’s a certain feel for every neighborhood, and you can usually tell who doesn’t belong. “Someone will usually stand out,” Hsiung says. Don’t be afraid to call the police to report someone suspicious there, even if it turns out to be wrong. Hsiung once called about a newspaper delivery person. “I did feel a little foolish, but I didn’t want to go off to work and find out a house on my street was broken into because I didn’t call,” he says.

Be sure to tell neighbors when you’re going out of town, so they can look out for your house. Hsiung also recommends using an online social network such as NextDoor.com, which connects neighbors virtually and promotes discussions.

Lighting is really important in preventing home intrusions, says Hsiung, who recommends standing outside your home at night, looking for the dark, shadowy areas. “You want the light to illuminate your doorways and pathways to your house,” he says, since burglars are opportunists. They’re less likely to break into a house with good motion-sensor lights, which are inexpensive and available at hardware stores. “They’re very easy to install if you already have porch lights,” he says, and can be programmed to different sensitivity levels.

While looking for dark, shadowy areas, look in your yard for spots with heavy vegetation. You should cut these bushes and trees back, as they are a good place for people to hide. “You don’t want to come home and have the boogeyman behind the bush,” Hsiung says.

Think about using dense hedges or thorny bushes near windows to keep away predators, says Lewis Long, vice president of consumer marketing for ADT Security Services. Make sure to keep them tidy, so they don’t become a place for intruders to hide. Also, trim back any trees that may provide access to a second-floor window.

Another trend is installing security cameras outside. Long says internal and external home cameras are one of the most popular additions to alarm systems.

While 360-degree coverage is ideal, Hsiung says that a burglar could be deterred if he sees cameras recording at the front or back doors. Even a fake camera can be a deterrent, but it has to look legitimate. “A toy camera won’t fool anybody,” he says.

Hsiung says prices for simple surveillance cameras are reasonable, but technology can go so far as connecting to your cellphone, so you can watch when you’re not home, or snapping a picture each time someone opens a certain door. Obviously these kinds of options drive the cost higher, but it’s all a matter of your home security preference.

Being a dog lover can also have its security perks. A barking dog can be a great addition to security. Not only can dogs make a lot of noise, but, “What burglar wants to deal with a possible bite?” says Hsiung.

Long agrees that dogs can be a good deterrent, putting them in the same category as an alarm sign or video camera for protecting your home.

No dog? Try posting a “beware of dog” sign, or leave a large dog dish by the back door. “It should make them think twice,” Long says.

To alarm or not to alarm? There’s no right answer. An average alarm system costs $400 to $500 to install, says Long, and monthly monitoring ranges from $43 to $58. “People will buy a system and have it installed as a result of a life-stage change; they’re looking for some peace of mind” says Long. However, once they’re settled, they may become lax and not use it.

That’s what happened to Schwartz, who stopped setting her alarm regularly prior to her house being burglarized. It’s those times when other methods can help deter intruders. Multiple layers of home security make your house a challenge for burglars, who are usually looking for a quick in and out. With a properly lit entryway and nowhere to hide, the final line of defense can be the alarm, scaring away those individuals who are afraid they’ll be caught.

Long says, “The very presence of the system is a deterrent, and with any loud noise, in most cases, folks who like to do harm will not take that risk.”

Protecting your home’s access points means making sure your doors, windows and locks are sturdy. “Deadbolts are definitely a good thing,” says Hsiung. Also, make sure your door is a solid wood or metal construction with a good frame. “If the wood is deteriorated, it won’t take much to force open,” he says.

Use an inexpensive dowel in the windows or the sliding glass door, so they can’t be pried open. “Any piece of wood that fits in the track works,” he says.

Hsiung suggests using a safe for valuables, preferably one bolted to the floor, so the thieves can’t carry it away. And while a jewelry box looks pretty, it’s safer to store your baubles in a less obvious container, such as Tupperware.

Keeping physical property safe is concerning, but you should also worry about identity theft. “That would do way more damage than losing your physical valuables,” he says.

Keep items such as your passport and Social Security card locked in a safe place, and don’t put your master password on a sticky note near the computer. Consider storing your documents in the cloud instead of your hard drive, so if thieves do steal your computer, they won’t have access to your bank account or other important information.

Ways to Make Money Online Fast From Home in 2021

Here is the list of 40 Charming Guest Bedrooms. Bright Spot Designer Liz Carroll kicked off the creation of this bright and happy space when she...
Read more
Home Improvement

Best Laptops for Programming in 2021

Programming is writing and running a computer programme to attain a specified computing result or finish a task. The best laptop for programming laptop...
Read more
Home Improvement

Everything You Need To Know About Dental Implants