Home Nutrition What’s the Difference Between Shrimp and Prawns?
Nutrition 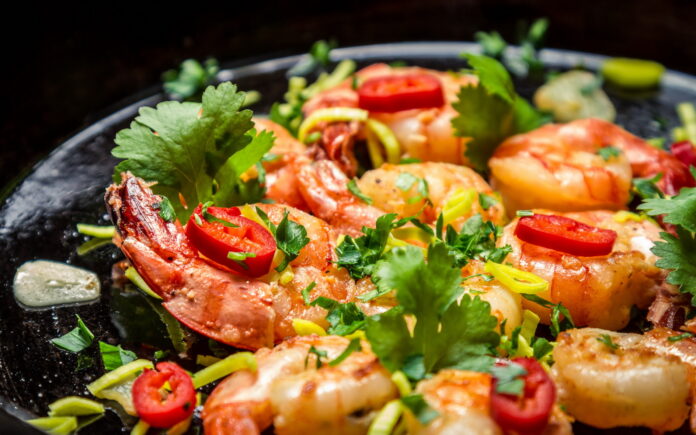 Whether served on a bed of grits or cradled in a corn tortilla, shrimp are the undeniable all-star of any coastal kitchen. Throw the term “prawn” in the mix, and things get a little confusing—is it an Australian term? Just a really big shrimp? Let’s put this coastal culinary quandary to rest.

How to Tell the Difference Between Shrimp and Prawns

When it comes down to their biology, both shrimp and prawns are decapods, meaning they’re crustaceans with 10 legs.

Shrimp, the more petite crustacean, live in saltwater. To tell if your crustacean is a shrimp, there are a few small but distinguishing details to look for. Shrimp have claws on two of their legs, and the second segment of their shell overlaps the first and third shell segments. This also gives a distinct bend to their shape, another detail to watch for when seafood shopping.

Prawns live in fresh or brackish (somewhat salty) water, often near the bottom. These crustaceans have claws on three of their legs, which you can spot if you purchase your seafood unpeeled. Prawns’ shell segments overlap down their abdomen (first overlaps second, second overlaps third), meaning there’s less of a distinct bend in their body.

A good rule of thumb to differentiate between the two is size, as prawns are typically larger than shrimp. If you really want to know what crustacean you purchased without making a trek out on a shrimp boat, just check the shell. If the second segment overlaps the first and third, you’ve got a shrimp; if the segments overlap down the abdomen, you’ve got a prawn.

Can You Taste the Difference?

Does this mean you need to run to the fridge and inspect the shell of every little crustacean before your next shrimp boil? No need! Culinary-wise, the flavors of the two have no major distinguishing factor, aside from prawns’ slightly sweeter taste. Prawns also tend to be more expensive than shrimp.

But overall, your purchase is more likely to be affected by the diet, habitat, and region of the seafood. Your energy is better spent on finding out where the product is sourced from as opposed to the minutiae of its taxonomy. Wild-caught shrimp are best, as the majority of farmed shrimp comes from regions where regulations are limited.

What’s the Difference Between Snow Crab and King Crab?