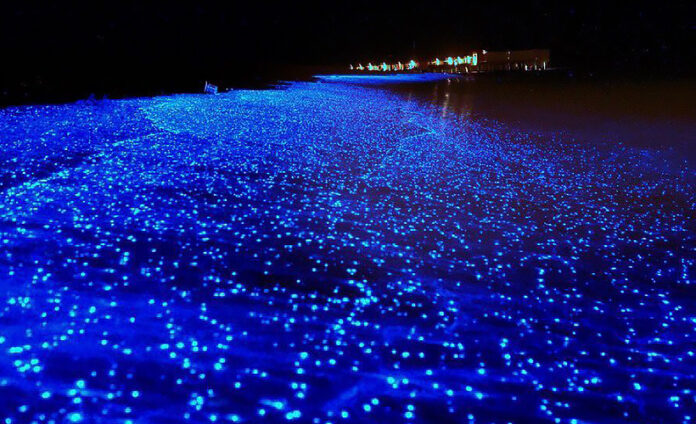 A lot like catching the northern lights—with an underwater twist—nothing can prepare you for seeing the swirling saltwater luminosity in the world’s best bioluminescent lagoons. When conditions are best, the boat you’re riding in will leave a trail of greenish-blue light in its wake and, should you decide to plunge into the water, your hair and face will squiggle and shine with the glow of dinoflagellates doing their phosphorescent thing. (Don’t worry, this species of marine plankton is harmless.)

It’s an otherworldly coastal experience that has to be experienced to be believed. From an island off Colombia and the back waters of northern Jamaica to a magical spot in the Sunshine State, we’ve rounded up the best places to go for the glow.

Off the coast of Colombia (a two-hour boat ride from Cartagena), the coral-fringed island of Isla Múcura sits in the San Bernardo Archipelago and is home to just two hotels including the love-ly, all-inclusive Punta Faro, where the rustic but elegant rooms have hammocks and ocean views. In addition to the spectacularly pristine marine environment on the reefs just off-shore, it’s the bioluminescence of the waters here that will take your breath away. The hotel arranges tours during which you jump into the bioluminescent waters and move your body underwater to watch the luminosity activate all around you.

Visitors to Grand Cayman usually get waylaid at one point or another by a Mudslide (or three) at Rum Point. But it’s worth staying on the wagon after dark for a magnificent paddling experience that leaves from Rum Point with Cayman Kayaks to reach the island’s only bioluminescent bay. Tours are based around the moon cycle each month for the best (read: darkest) viewing conditions, and it’s just a ten-minute paddle under the star-filled sky to reach the area where the bioluminescence is at its best. Guides who can talk about astronomy as authoritatively as they do about the phenomenon of bioluminescence lead you in sit-atop kayaks. (If you’re not a confident kayaker, they can toss out a tow rope to help you along.) And while swimming in the waters isn’t encouraged due to an abundance of jellyfish, you’re welcome to move your hands, feet, and paddle in the sea to stimulate the glow.

Simple wooden boats depart nightly from a laid-back waterfront seafood restaurant called Glistening Waters near Falmouth, on Jamaica’s north coast, for fascinating tours in the nearby Luminous Lagoon just five minutes from the docks. You’ll know you’re approaching the glow zone when the boat’s motor starts turning the water green, and darting fish appear underwater like streaking comets. The highlight comes when everybody is invited to descend the boat’s ladder into the chest-deep waters to turn their swinging arms and splashing legs into magic wands of bioluminescence.

Mosquito Bay (it has a nicer ring in Spanish, Puerto Mosquito) may not sound like anyplace you’d want to spend your vacation time, but this bioluminescent bay on the southern shore of Vieques island, off Puerto Rico, is one of the best places in the world to see the phenomenon first hand. Take a scoop of the muddy brown water in your hand and watch the blue sparkles dazzle like a billion sapphires—the effect of the bioluminescent plankton producing phosphorescence (a defense mechanism) when the water around them is disturbed. The bay is said to have one of the highest concentrations of the plankton in the world, and it results in one of the brightest underwater light shows out there. Several operators run boat tours to the Bio Bay, as it’s called, including Black Beard Sports.

During the warmest months of the year, bioluminescence can be seen in Florida’s wildlife-rich Indian River Lagoon, close to Cape Canaveral on the state’s Space Coast. June through early October is the best time to head out with A Day Away Kayak Tours on the company’s fleet of incredible clear kayaks that allow you see the fish darting through the water under you through the transparent boat bottom. Tours take place within the Merritt Island National Wildlife Refuge, so you never known if a manatee or dolphin might happen by, too.

Dusit Thani Maldives resort is a prime place to base for seeing bioluminescence right from the beach on the lovely Mudhdhoo Island (it’s also the only resort on this tiny island in the Baa Atoll). Photos of the spectacle—it looks like a billion shimmering jewels got overturned from a pirate’s treasure chest onto the sand—have gone viral online. But there’s nothing quite like padding barefoot along the beach here and experiencing the phenomenon for yourself. While the luminous effect on the beach isn’t due to plankton but rather the work of ostracod crustaceans (also known as seed shrimp), which emit light for an even longer time, it’s no less wondrous to stroll the beach and leave behind nothing but footprints that glow.

Boat trips at night from Padang Bai are one way to spot bioluminescence in this busy port in Eastern Bali. Ferries leave from here to the neighboring island of Lombok, across the strait, or you can head out with a local fisherman. And it’s out in the waters of the strait, just a five-minute cruise from the shore, that the spectacle can be seen. Certified scuba divers can enter the water with operators like Neptune Scuba Diving for the most hands-on view of the Tinkerbell-esque bioluminescence. The area is a rich place for divers to see marine life—everything from cuttlefish to Spanish dancer nudibranchs are commonly seen in these waters. After a great dive, on the safety stop at the end, divers while away the minutes agitating the water with their hands and fins and marveling as the bioluminescent sparks fly.

What Is the Cost of Relocating a House in 2021?

What Do Bed Bugs Look Like? How to Get Rid of Bed Bugs