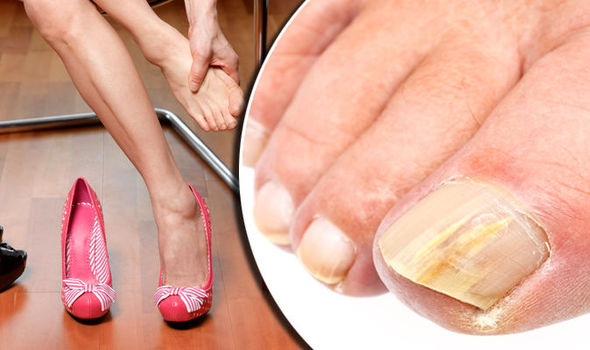 iscolored, brittle, and distorted – if your toenails are showing any or all of these symptoms, you may be suffering from onychomycosis, commonly known as toenail fungus infection. Many people tend to ignore the symptoms of this infection, thinking that they will disappear on their own but little do they know about the dangers of leaving them untreated. To get you more acquainted with the health risks associated with toenail fungus infection, we have curated the following list. Have a look –

If you are suffering from toenail fungus infection, you will observe that with passing time, your nail starts to become thick and distorted. This misshapen nail causes pain whenever you try to wear a certain kind of footwear. However, in the beginning, you don’t feel any discomfort and tend to ignore the thickening of your toenail. Owing to this, you don’t seek treatment and it keeps on growing thick which ultimately become the main cause of your discomfort. As a result, you feel difficulty in walking and pursuing any activity which involves your foot.

The Spread of Nail Fungus

Due to the highly contagious nature of onychomycosis, your healthy nails and skin are at the risk of getting the same infection. When toenail fungus spreads to the surrounding skin, it causes a skin condition called athlete’s foot. Leaving your feet cracked; it is marked by itchiness and redness. Not only does it spread to your skin but also affect your healthy nails.

If you think that fungal infection only affects your nails, you are certainly wrong. It can affect any part of the body. Fungi mostly develop in the warm, moist environment and can spread really quickly to other parts of the body. People who are suffering from health conditions like diabetes and have a weakened immune system are more prone to this kind of fungal infections. Once it becomes severe, it spreads to the skin, as discussed previously, leaving the skin cracked. As a result, it becomes more susceptible to bacterial infections.

When fungus infected toenail becomes severe, it needs to be removed from the nail bed. Sometimes it becomes loose by itself but at other times it is removed using a procedure called avulsion. In some cases, using another procedure called matrixectomy, the infected nail is removed permanently.

If you are also suffering from toenail fungus infection and want to get the best foot treatment before it gets worse, book an appointment at a reputed clinic like Aayna Clinic, a pioneer in treating all kind of severe skin conditions including onychomycosis.