Home Health What Are the Key Challenges in Implementing Wearables for Vital Signs Monitoring?
Health

What Are the Key Challenges in Implementing Wearables for Vital Signs Monitoring? 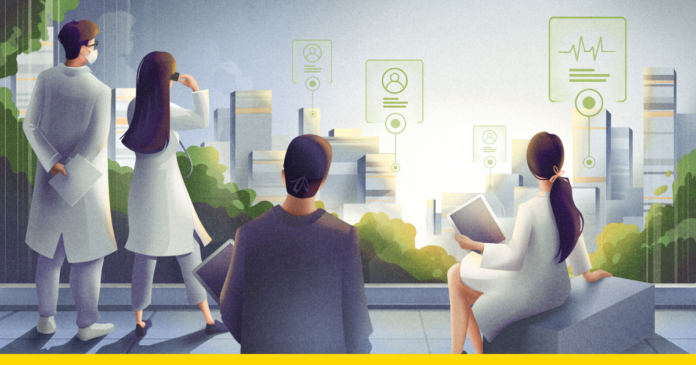 According to a report by Grand View Research, the total value of the wearable devices market amounted to $37 billion in 2020 and is projected to reach $104 billion by 2027. The CAGR is expected to be 15.9% for the 2020-2027 period. The report says that the Asia-Pacific region will show the highest growth rates, although North America remains the leader in consumption. Read the article to learn more about the latest healthcare software development trends and the prospects for further growth of the market of wearable devices in healthcare.

How the market of wearable devices in healthcare is advancing

Today, consumer electronics apps dominate the wearables market (about 45%), followed by devices for health monitoring and medical purposes. Consumer electronics include different apps in such fields as fashion, fitness and sports, entertainment and multimedia, as well as multifunctional devices. Given the growing demand from millennial consumers, market players are focused on developing devices that can keep up with luxury standards and help users plan their working time.

The increase in the number of devices and enhanced communication between them directly affects the development of wearable products and related technologies. The wearable device market remains highly competitive, which will lead to new models of devices with advanced functions being produced by leading manufacturers.

According to the place of attachment, the most popular wearables are wrist models, primarily smartwatches and wristbands. Then come head-mounted devices, such as Google Glass, Microsoft HoloLens, VISR Goggles, and VR helmets. Among the leading manufacturing companies are Alphabet, Samsung, Garmin, Huawei, Apple, Sony, HTC, Fitbit, and Xiaomi.

Wearables are devices that are attached to users’ bodies in order to read their vital signs and physical activity parameters, accumulate statistical data, and exchange information with other devices and cloud services.

Although, for most people, wearables are primarily associated with sensors and vital signs, this technology is much more complex. As a rule, IoT wearables consist of the five layers that contribute to the effective use of devices and seamless interaction of their elements. Four of the layers are functional, and one of them is personalized and associated with the end-user.

The user layer of wearables presents the following challenges:

The sensor layer is responsible for such parameters of the device as the sensitivity of its sensors, measurement accuracy, ease of attaching and wearing it, and battery durability. One of the challenges for developers is the further improvement of sensor technologies, i.e. ensuring the reliability of the received data and the absence of critical failures. There is also a usability challenge of combining ergonomics, beauty, and usability of devices with accurate sensory diagnostics.

The network layer defines the interoperability of wearables with the help of standard or hybrid topology. At this level, such issues arise as the need to ensure sufficient energy efficiency of devices, security and confidentiality of user information when transferring it to data processing centers, reliable network management, and compliance of devices with QoS requirements.

The issue of increasing the battery performance in devices remains a priority. Connecting a device to the Internet makes data collection easier but requires a more powerful battery, which, given the tiny size of wearables, is a technological challenge. In order to solve the issue of increased power consumption, wearables are quite often integrated with mobile apps. The information is transferred to them through personal area network (PAN) protocols and is subsequently redirected to cloud storage and other data collection centers.

Among the technologies that are most commonly used in medical devices, we should mention Bluetooth and ZigBee. Bluetooth is applied in mobile phones, smartwatches, and laptops and is widely used for integration with various wearables. Low data rate and short signal distance are offset by low power consumption and stable connection.

Just like Bluetooth, Zigbee is used over short distances – from 10 to 100 meters, given the absence of obstacles. It is applied in apps with a low data rate, which can work autonomously for a long time. This technology is considered to be simpler and more affordable if compared to WiFi or Bluetooth; however, it requires additional installation of gateways for the communication between devices due to the absence of IP protocols, which can somewhat complicate network data transmission. The choice of one or the other technology depends on the parameters of the connected IoT device.

As a result, the issue with network communication now resides in the need to choose between high power consumption and the ability to quickly transmit information from a device on one hand and low power consumption and a more complicated data transmission process on the other hand. The fully autonomous work of wearables is hindered by limited data storage capabilities, the low computing power of device sensors, and limited communication bandwidth and battery power, which also sets limits on the technology’s advancement.

At the layer of apps and services, mostly organizational challenges arise, related to obtaining the maximum benefit from wearable devices, depending on the use of their functionality. There is a core difference between conventional and specialized medical devices. The former are designed for fitness purposes and the collection of information about users’ physical activities, and the latter helps doctors monitor patients’ vital signs and diagnose diseases. The difference between these groups primarily lies in the accuracy of measurements, reliability, and safety of the devices, as well as the possibility to use them without special competence. Misuse of medical devices can pose a threat to user health and affect device performance, hence additional effort to test devices and inform users is required.

Finally, the efficiency of the processing layer is essential for collecting quality statistics and Big Data from devices and subsequently processing and analyzing them:

How to develop a competitive healthcare wearable device

Each of the processing layer elements can become a software and technological challenge for healthcare organizations and analytical departments, collecting and processing information from wearables to perform global surveillance over public health and build predictive models for assessing the risk of the spread of diseases. At the same time, these areas are well-known at international companies with extensive experience in the market – for example, Andersen.

Thus, wearables are highly demanded and have the potential for further growth. In healthcare, wearables are used to obtain relevant information on people’s vital signs, physical activity, and mobility, which allows healthcare workers to monitor the well-being of patients and vulnerable people, diagnose diseases early, adjust treatment plans, and so on.

All the layers within wearable technology are essential for the proper collection and processing of user data. The challenges facing custom healthcare software development in this field reveal the need for further improvement of technologies, the introduction of new strategies and approaches to device optimization, and the need for a professional approach to the development and maintenance of software components responsible for collecting, storing, and analyzing information.

My name is Sergey Avdeychik, and I am passionate about using technology, learning new skills and being always up for a challenge. Currently, I work as a Director of Healthcare Technologies at Andersen. Being a part of the IT family for years, I aim at transforming IT processes in support of business transformation.

26 Best Detox Tea For Weight Loss,We can all sense the change in the air as we approach spring.Our spirits are raised and we...
Read more
Health

Mental health disorders like depression and anxiety have been on the rise in recent years. With the pandemic, riots, financial duress, and wars, it's...
Read more
Health

Based on a number of qualifying selection criteria, this list of the best drug rehab facilities in the United States has been compiled.These requirements...
Read more