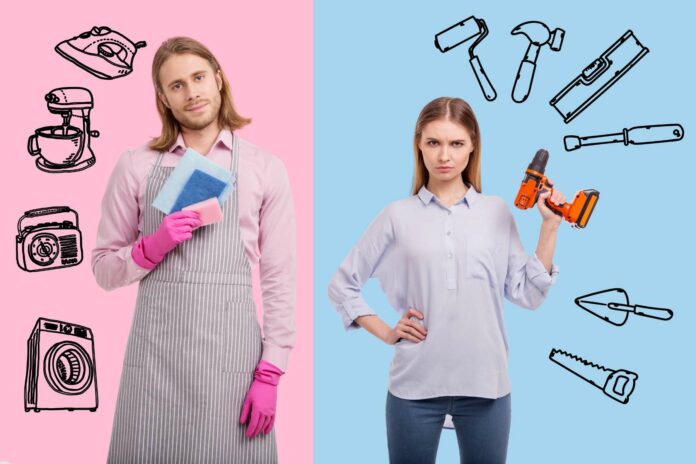 Martine Rose recently challenged gender norms with a men’s collection that questioned traditional masculinity. The line featured high-waisted jeans and trousers, large coats and jackets, and even handbags; these are just a couple of ideas that made a big splash!

Martine’s style has always tested boundaries, which takes an incredible amount of skill, finesse, and ability—it isn’t easy to blur lines, especially when it involves playing with established cultural expectations. If nothing else, Rose’s statements against longstanding traditions interrogates the definition of manhood, and her passion and commitment to deconstructing these sorts of archetypes makes her an invaluable addition to the fashion world.

Where Martine Rose subtly battles the idea of gender, Charles Jeffrey Loverboy takes things up a notch, employing a more aggressive visual strategy that keeps viewers wondering what is acceptable to wear. He believes that anyone should be able to flaunt what they want without fear of judgment; according to him, “Everyone is welcome.”

Loverboy’s Spring/Summer 2019 collection was particularly creative, incorporating large, Seussian hats and hair gelled into devil horns. The clothes, too, were bright, and used patterns that did not exactly match, yet they were undoubtedly pleasing to look at.

Charles Jeffrey Loverboy’s eye-popping combinations bring a childlike innocence to mind; along with his vibrant makeup choices and whimsical patterns, viewers feel as though they are looking into a dreamworld where everyone is able to be themselves.

Vivienne Westwood is an environmentalist at heart and is more concerned with the natural world than with the limitations of gender norms. In fact, she believes that traditional cultural expectations are worthless, and this attitude is reflected in her designs.

As an environmental activist, Vivienne does not assign her showcases confining themes. In her last show, for example, her models were half-dressed in obscure clothes that were purposefully gender indeterminate. Even the shoes Westwood designed were made of smashed Evian bottles, which symbolized the damage that humans have done to the planet.

For years, Marc Jacobs has challenged gender with his designs, and as a result, his fits have had a profound impact not only on fans, but on rappers and hip-hop artists alike. In short, his creativity and stylistic sensibility are second-to-none, and he knows how to silence naysayers with fresh wardrobe choices that question comfortable institutions.

Jacobs has also challenged norms in ways that go beyond high fashion. In 2021, he got an amazing male facelift, then broadcasted his results to the social media world. There has always been a stigma around male plastic surgery, but Marc Jacobs showed that there is nothing shameful about wanting to look your best—men can do, and wear, whatever they want!

Rottingdean Bazaar is a two-person collaboration of UK designers Luke Brooks and James Theseus Buck. These moguls take an interesting approach to sexuality and gender representation—in their Spring/Summer 2018 collection, for example, they featured a man wearing stocking with glued-on matchsticks, and a woman wearing a black sweatshirt with two miscolored chest balloons. Additionally, at their first show for MAN, a Fashion East initiative, they decorated their models in scissors, wrenches, and other household items; put more simply, the models had tools glued all over their bodies and zip-tied to their heads!

Throughout its existence, Rottingdean Bazaar has tried to send a message: that men often think they have to be abrasive and aggressive to be considered masculine.

Oluwajimi’s pieces are fluid across genders, showing us that, in the end, clothing is just clothing, and it doesn’t matter who wears what. In his own particular way, he seeks to reconstitute the human perception of gender and showcase how it impacts societal norms.

There is every chance you may not have heard of the word, leave alone pronounce it, but dermatologists say that gluconolactone is the best...
Read more
Beauty

5 Things You Need to Know Before Getting Botox Treatment

Thousands of Botox injections are performed across Canada every year. There is a plethora of reasons why people get Botox, and it’s not just...
Read more
Beauty

How often should you wash your hair for all hair types

Hair types are different from each other and as such require different forms of care. So the question arises how often you should wash...
Read more